Game is now live on Steam!

Sanctum Breach is a top down ARPG in the vein of games such as Diablo 2, Path of Exile and Grim Dawn. It is currently in the very early stages of development, although most of the core features are in place, or have at least had work done to them. A very large portion of documentation is already completed and from this point forward implementation is mostly just iterations of new items, enemies and skills. Nearly every zone that will be in the game has already been completed.

Check here for all the updates!

You are the child of Four Gods whose responsibility it is to protect the fate of mankind as it was prophesied that they would one day bring about their own ruin. So using their immeasurable powers they fashioned a device “The Auxilium Porta” which enabled them to travel through both time and space, rectifying the most damning of mistakes, past, present and future, in this world and every other. However, they grow weary, and must pass this task on to their kin. You are not their only child, nor are you the strongest or smartest, but you have a pure heart and seek to protect those around you. Your siblings would use the device for their own ends, and that is what they try to do. Attempting to seize control of the device before the Gods can pass it on to you, it breaks in the heart of the battle. Scattering in to three pieces; “The Core”, to stabilise the energy of the device. “The Tempus”, used to travel through time and “The Locus”, used to travel through space. Defeated by this blow, the Gods fade away, and the children go their separate ways, never to speak to one another again.

You awaken on the bank of a river, tired and scared. As you make your way through this hostile environment you begin to regain some of your fighting prowess. Eventually you make contact with a small band of Orcs, who immediately attack you. After vanquishing them another Orc, unlike the others, hails your attention, he is caged. You learn from this prisoner that he was captured after leaving The Mountain Pass not far from here and stumbled straight in to an Orc Encampment. They planned to lay siege to the mountain tribe of Orcs and take a magical artefact that is in their possession. Fearing this artefact might be a fragment of the device, you hurry through the Orc Encampment and into The Mountain Pass. With the fragment in sight (in the grubby hands of an Orc Sorcerer), you reach forward to claim it, but its snatched from your grasp. A Demon appears and then disappears before your very eyes, taking the fragment with him. Rushing through the quickly vanishing portal you end up in The Whispering Caverns, where you confront the Demon as he channels the energy of the fragment. Once he has been slain you take the first fragment (The Locus) for your own. Sensing your birth right, but unable to function properly it teleports you to Domum Glade, miles away from your previous location. You travel through the dense forest and find yourself in a small rustic village. The people here provide you with food and shelter in exchange for clearing out the old castle and graveyard of the Undead. Once the task has been complete they tell you of a ferryman who takes people to The Fortunate Isles and there are rumours of strange magic there.

Upon arrival at the Isles the ferryman is in a hurry to leave. You make your way inland and discover an aberration, caused by possessing “The Locus” without any other fragments to stabilise it. Stepping through the portals you find yourself in familiar but strangely different environments. They are places from your world but in a parallel universe. Fighting harrowing entities, not of this world, you manage to escape and find yourself back on Earth. Proceeding through a swamp you encounter a Shaman, who explains he has seen, in a vision quest, the fragment which you seek, guarded by a ferocious dragon deep within a peculiar cave. Traversing a desert in which skeletons wage an eternal war, you find a darkened mountain and a cave jutting out of the top. After reaching the mouth of the cave, you see a host of vibrant, eerie lights emanating from within. The dragon lies dormant in the centre of the cave, protecting its precious treasure. So you claim the second fragment piece (The Tempus) for yourself, only for him to awaken.

After a battle with the terrifying beast you flee the cave, down the side of the mountain and back into desert terrain. After a hard travel through the barren wasteland you come across a Desert Town Outpost. In which the locals tell you of a strange rift that has formed within the centre of the town. It’s a tear in the fabric of time and stepping through it you find yourself in a place like no other, The Twilight Valley. Alternating between a distant past and future, you find yourself in the midst of a battle between Humans and Dinosaurs, with one faction using the final fragment (The Core) to warp the minds of the Dinosaurs and control them. Siding with the other faction you eventually take control of the final fragment and upon touching it you are teleported to a lifeless place.

You find yourself in the spirit realm, the Shaman from Act Two appears before you and explains that he is the spirit of “The Auxilium Porta”, and that the device is a living thing with a will and vision of its own. He tells you that the device broke during the battle, it could sense that the other Demigods were unjust in their intent, and that only you were pure of heart. Now that you have collected the fragments you must endure one final test of strength to prove your worthiness. As you make your way through the spirit realm everything around you is warped by the instability of the fragments. One moment your walking through a beach on Earth, next you’re in the heart of a Volcano on a shattered and forgotten planet. As you proceed through this unstable dimension you encounter the spirit forms of your siblings, who try to take the fragments from you. After defeating them all you find yourself in Sanctum Sanctorum, where the spirits of your forefathers wait for you. They restore the device to its former strength and now entrust you with their task.

All the core systems are now in place and I am looking at improving them and listening to feedback from the Alpha, whilst working on new content ready for Beta release.

At this stage I will be constantly revising old content based on feedback, trying to cover weaknesses of the game and work on new content.

What I Ask Of You

Feedback. Any and all feedback is crucial to me at all stages. Because I am developing the game by myself, all my thoughts and opinions are in a vacuum, meaning that I never have to defend my decisions and if I don't have to do that, then some bad ones may slip through the net!

Thanks For Checking This Page Out! 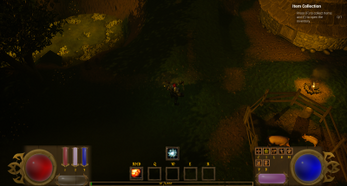 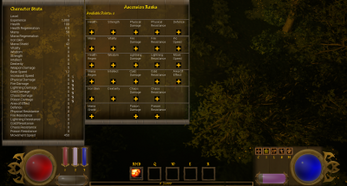 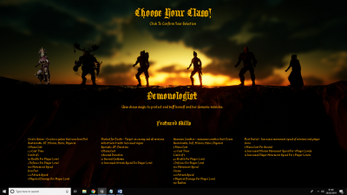